RuneScape devs team issued a patch note of tweaks and improvements they prepped up for Loot Sharing and Stone Spirits in the game, as a potent demonstration of perfectly performing its own New Year's resolutions in this phase.

The patch note mainly focused on the major improvements to Loot Sharing, Stone Spirits, and several other functionalities within the game. It's also the remodification of some imperfections caused by the overdone tweaks from last Smithing & Mining Rework update.

For starters, let's take a look at what's happened in Loot Sharing, shall we? For Loot Sharing, RuneScape devs added a new feature to the Loot Sharing system that allowing the players to give away their own loots to anyone else in the same friends chat without no longer adding these people to the friend lists first. With this feature added on, there are plenty of conveniences created and a few more time saved for both sides of parties no doubt in the game. 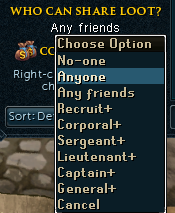 The Second is Stone Spirits. The motivation for driving the devs team to modify numeric values and other parts in Stone Spirits is the devaluation of Rune-Ore Stone Spirits and the abnormity of the Boss Drop Table that was ascribed to the release of the Mining & Smithing Rework. Below are all changes of Stone Spirits that this update has committed to adding in no time: As usual, the devs are rather confident about the improvements these changes will bring into while they committed to monitoring the running situation as long as possible.

The Last Patch they discussed in the announcement is few tweaks they were adding to the Grace of the Elves. Below is the complete quote of the improvements about this subject:

There is a batch of other contents in the new update that hasn't been brought up by Jagex in this announcement. Feel free to browse through the whole content of this update through here.

From now on, every order on MMOAH regarding RS Gold, especially OSRS Gold, will be given freely with exclusive coupon code "RS6" - Anyone can use this code in the checkout page to save your payment 6% off. And more importantly, for anyone who yearns for substantial OSRS Gold with fast and secure delivery, our website guarantees that all of our Runescape order will be completed within 30 minutes otherwise a full refund will be issued immediately. Now we gladly inform you that One Million OSRS Gold on our site only cost $ 0.99. Here is the quick-buy entry ⏩ to buy RuneScape Gold