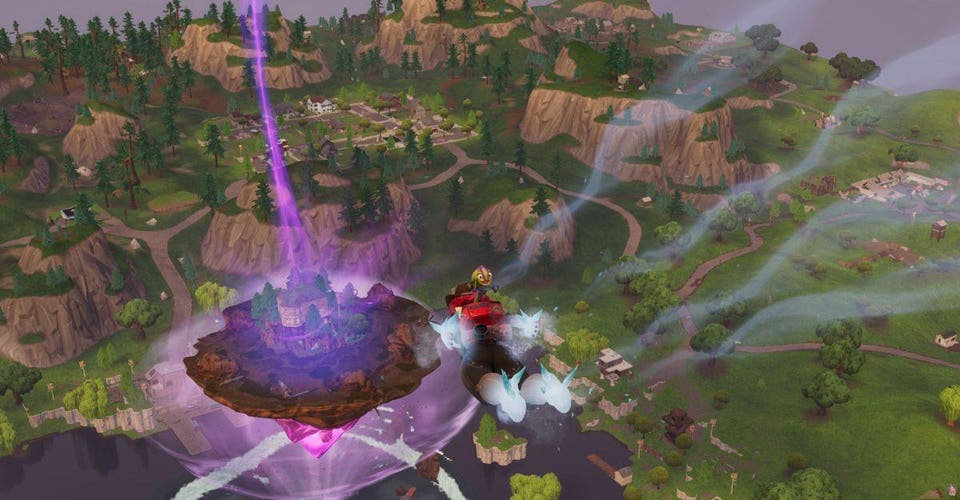 For those that have been with us since the beginning, this cube stuff has been going on a very long time. Technically, the saga of the cube in Fortnite: Battle Royale began in Season 4 with an epic rocket launch that tore a hole in the sky itself, leaving a crackling blue rift in the skybox for the rest of that season. The rift then summoned Kevin the cube, who spent most of Season 5 flopping around the map creating purple runes and low gravity zones before melting into Loot Lake, back when it was still Loot Lake. We can see the fruits of Kevin's labor now, as he sits at the bottom of the massive floating island that's spent the last few weeks activating said runes with its swirling cube energy, presumably the same power that has infected the entire house on the island with a bad case of "more cubes." Now, the Island has moved back over its original location over Leaky--formerly Loot-Lake, and the saga continues.

Whatever the Cube/island is doing right now, it appears to be crescendoing. A few days ago the runes rose out of the ground and then made their way to to the island before falling back down. Now, there's a bolt of purple energy coming down out of the sky towards the island, clearly preparing for something big. It can be hard to guess what that big thing will be, but I can't imagine that it's a coincidence that the Halloween 'Fortnitemares event is starting this week.

The leading theory regarding Loot/Leaky Lake is volcano-related. Volcanoes were featured prominently on the cube-adjacent "Dark-bomber" skin, and it would be a decent way to shake up what was until the beginning of the season a sort of lackluster area: both Loot Lake and Moisty Mire were formed around the idea of mobility-limiting water, but that was before Fortnite developed its particularly hyper-mobile character. Plenty of the game's less interesting areas have been axed since then, and now it feels like it's time for the lake to go.

Regardless, I'll be glad when all this cube business finishes up. The comet was a great plotline for how contained it felt: comet appeared, comet got bigger, comet smashed into the map, print. As anyone who's spent time with long-running TV shows can tell you, you need a balance between continuing plots and resolution, but this cube business has been one big cliffhanger since it's started, and it's getting exhausting. I'll be happy when the island does something big and then we start a new, non-Cube related plotline.

Have you suffered enough from lousy equipment and limited resources in Fortnite that negligibly small to help you thrive in all competitions? Are you running out of time to farm and harvest due to the busy schedule? Well, here is the savior for you to meet - MMOAH. MMOAH Fortnite store provides the most resourceful products with reasonable low price and generally-30-minute delivery. If you look for buying Fortnite Items, Highly recommend MMOAH Fortnite store. View more details or purchase now through clicking Fortnite Materials or Fortnite Items for sale.